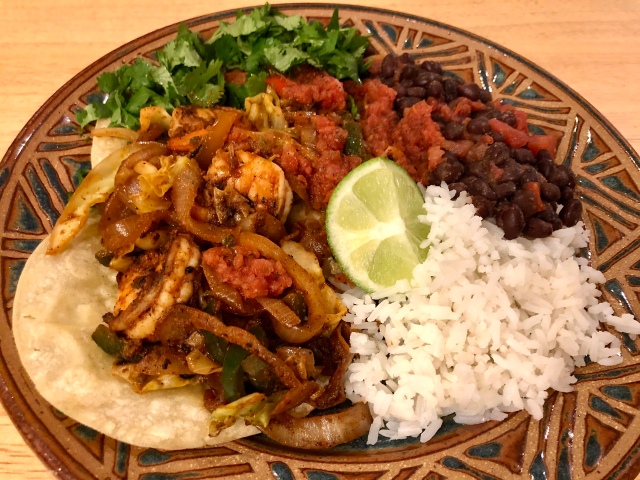 What a filling and tasty dinner made mostly from bits and pieces left over in the fridge from this week’s menu.  I used this recipe from healthyfitnessmeals.com. Changes we made to the recipe were lime juice in the shrimp/veg mixture, less cayenne, no black pepper (because I don’t like black pepper), more salt, added cabbage, and just olive oil spray instead of glugs of olive oil. Once you have everything cut up, the cooking goes quickly. We served the shrimp and veg over corn tortillas we warmed up in the oven.

As an accompaniment I made some spicy black beans which consisted of a drained and rinsed can of black beans, some salt, half of a can of petite diced tomatoes with chiles, cumin, and Mexican oregano. We also ate some leftover white rice.

How does this fit in with Leftovers For Dinner? (LFD) The leftovers were from a partially used head of cabbage, the remnants of a container of salsa, rice from dinners earlier this week, and the ends of a poblano and red bell pepper. This dinner was not what I had planned, but for Saturdays I look in the refrigerator for what needs to be eaten and create a dinner from what I see.